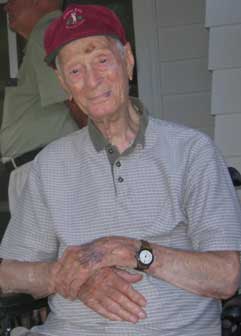 Stampings of Minnesota, Inc. regrets to announce the death of its founder Walter M. Schmitt on January 10, 2008.  He died in his apartment at Boutwells Landing in Oak Park Heights, Minnesota just 10 days prior to his 97th birthday.

As a living example of American ingenuity and determination, Walt started building a business by winning small assembly-related contracts and completing them in his home and garage on Dale Street in St. Paul.  Over time Walt’s skills earned contracts of growing importance and size.  His business, Schmitt Manufacturing, flourished and he moved his operations to the Griggs Midway Building on University Avenue in St. Paul.

In 1962, Walt merged Schmitt Manufacturing with his purchase of Micro Tool & Die (Minneapolis).   The merger resulted in the birth of Stampings, Inc. in 1963.  In 1965, the company became Stampings of Minnesota, Inc.

After a few years of great success, Walt decided the company needed to expand.  He relocated Stampings of Minnesota, Inc. to a 60,000 square-foot facility in Lakeville, Minnesota in 1972 where the company remains today employing roughly 70 people.

Along with numerous dedicated employees, vendors, family members and friends Walter M. Schmitt lead Stampings of Minnesota, Inc. in becoming an award-winning contract manufacturer of metal stampings and fabricating services for many of the world’s leading manufacturing companies.

In 1998, Walt sold Stampings of Minnesota, Inc. to his grandson Michael Nicklawske and retired from his position as President and Chairman of the company.

In his final year, Walt’s health began to reflect his age.  However, he was still able to visit his family and join them in celebrating Christmas Day, two weeks prior to his death.

Details regarding funeral arrangements will be posted separately as they become available.

A visitation service for Walter Schmitt will be held on Sunday, January, 13, 2008.  The service will be held at Sandburg’s Mortuary in North St. Paul, Minnesota from 2:00 pm to 4:00 pm.

A visitation and funeral service will be held on Monday, January 14, 2008 at St. Bernard’s Catholic Church in St. Paul, Minnesota.  The visitation service held in the church and will begin at 10:00 am.  The funeral mass will begin at 11:00 am.